“I’ve met nothing but beautiful people.”

Aunty Carol Mills, on having her family, developed a passion for helping vulnerable children access education. Her work as an Aboriginal Education Assistant in Walgett and Tamworth involved her supporting parents to understand the education system, teachers to understand the students’ needs, and ensured that children felt comfortable within their school.

Known to her family as ‘The Joker’ as she was always trying to make people laugh, Aunty Carol’s life took an unexpected turn in October 2010 when she suffered a severe asthma attack and cardiac arrest. The damage from the 15-minutes loss of oxygen to her brain would take years to recover from. Months of rehabilitation in hospital helped her to regain basic functions, such as walking and eating, and by the time she was discharged she could manage her activities of daily living independently.

By 2014, Aunty Carol had moved to Toormina to be closer to family and whilst she had greatly improved she still had her struggles. It was then that the Aboriginal Medical Service referred her to Carexcell Community Care for a home care package.

“Getting a package was the turning point in my life” said Aunty Carol.

The support Aunty Carol received from the Carexcell team brought her back from the emotional brink. With regular drop-ins by staff and ongoing support she started to improve. “I’ve been blessed and met nothing but beautiful people” she said.

“Stories of Creation” by Alison Williams is a tribute to the creation Spirits of the Gumbayngirr nation and their stories.

“The girls were there to support me when I was down” says Aunty Carol.

The services she has received have changed with her needs. At first she needed a lot of support to rebuild her emotional wellbeing and confidence. Simple activities like getting out of her flat, going for a drive, and having a chat made all the difference.

As she started to improve emotionally the other parts of her life also improved. Her home was looking great and her health was improving due to better food choices and well-managed access to doctors and health professionals. Aunty Carol started going to the gym with staff!

The time had come for her to once again support vulnerable children. The team at Carexcell helped her to enrol in TAFE and she is currently studying a range of topics to gain the skills needed for today’s workforce. With support, she has commenced volunteering at a local Kindy. “Give kids the right support and a little bit of love and they can do anything” she says.

Aunty Carol’s years of hard work to regain her independence and become a contributing member of the community was recognised on Thursday 16th March 2017, at the annual Close the Gap day ceremony. She received the Doctor’s Choice Award, from Galambila Aboriginal Medical Service, for the progress she has made with her health and emotional wellbeing.

Carexcell Community Care is honoured to work with people like Aunty Carol. Her passion to help others reinforces our commitment to older people in need.

This story was published in Seniors Newspaper in March 2017. 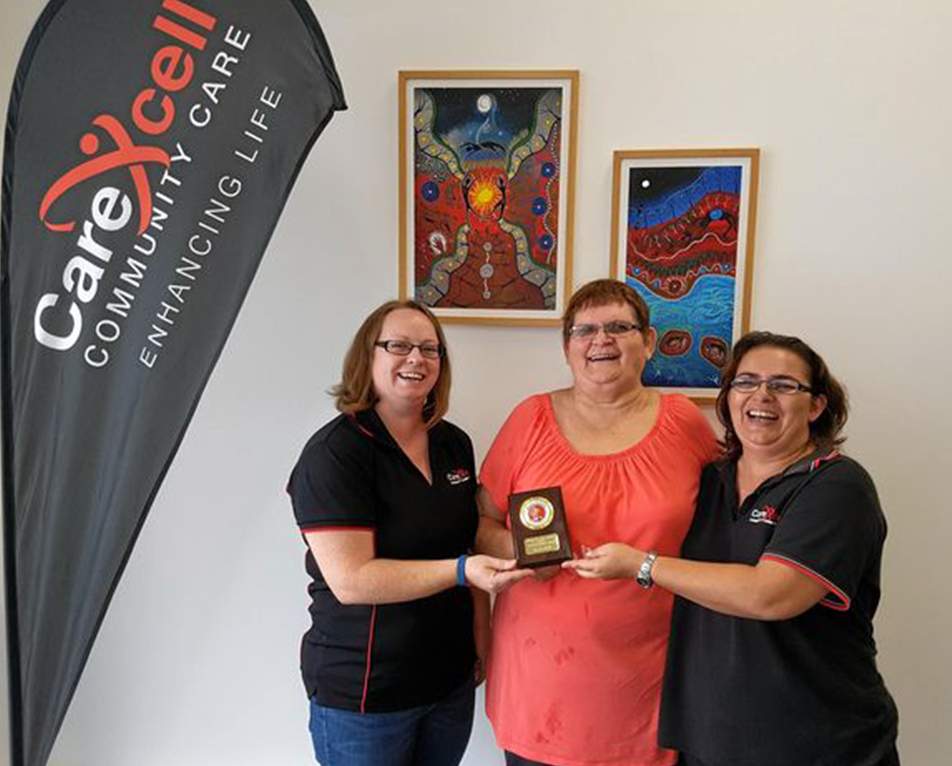 We are privileged to care for our clients. By working together, remaining flexible and by providing dignity of risk, we empower clients to achieve their personal goals. Home Care Package recipients have total control over the care and supports they receive.

Be empowered to make choices. You’re unique. We know that. We take the time to get to know you and the little details that are important. We support your choices in how your package is delivered.

The Assistance with Care and Housing Programme provides advocacy to eligible older people who are experiencing, or who are at risk of homelessness. If you, or someone you know is experiencing concerns with …

Veterans Home Care can provide you with approved one off or ongoing services. Our team are fully qualified Carers who are dedicated to ensuring all VHC Clients needs are met. On receiving your referral, you will be …

Carexcell understands that not everyone has access to the services they need with just one provider. We are happy to work with your care organisation to deliver extra supports. Talk to us today about any of the services we could offer you.